On opening night of Louisiana State University’s (LSU) new performance nutrition center, Senior Associate Athletic Director of Health and Wellness Shelly Mullenix was surprised and happy to see a third of the football players with salmon with pesto on their plates.

“Salmon is kind of pushing the envelope a little bit for these guys, but salmon with pesto is pushing it even further,” she says, crediting their acceptance of the meal to the fact that they were able to talk to the chef and watch it be prepped in front of them.

Normally, when diners are confronted with an unfamiliar ingredient and don't have anyone to ask about it, "it's not going on [their] food," she says.

The center located on the Baton Rouge, La., campus offers athletes from the school’s 21 varsity sports teams a place to fuel up and learn about eating healthy.

The nutrition center’s offerings change daily to cater to a wide range of tastes and nutritional needs. Executive Chef Michael Johnson says his menu is as diverse as his clientele, which includes everyone from football players to gymnasts.

“We cover the breadth of human beings,” he says. “I think we're aiming the menus at the very same idea.” 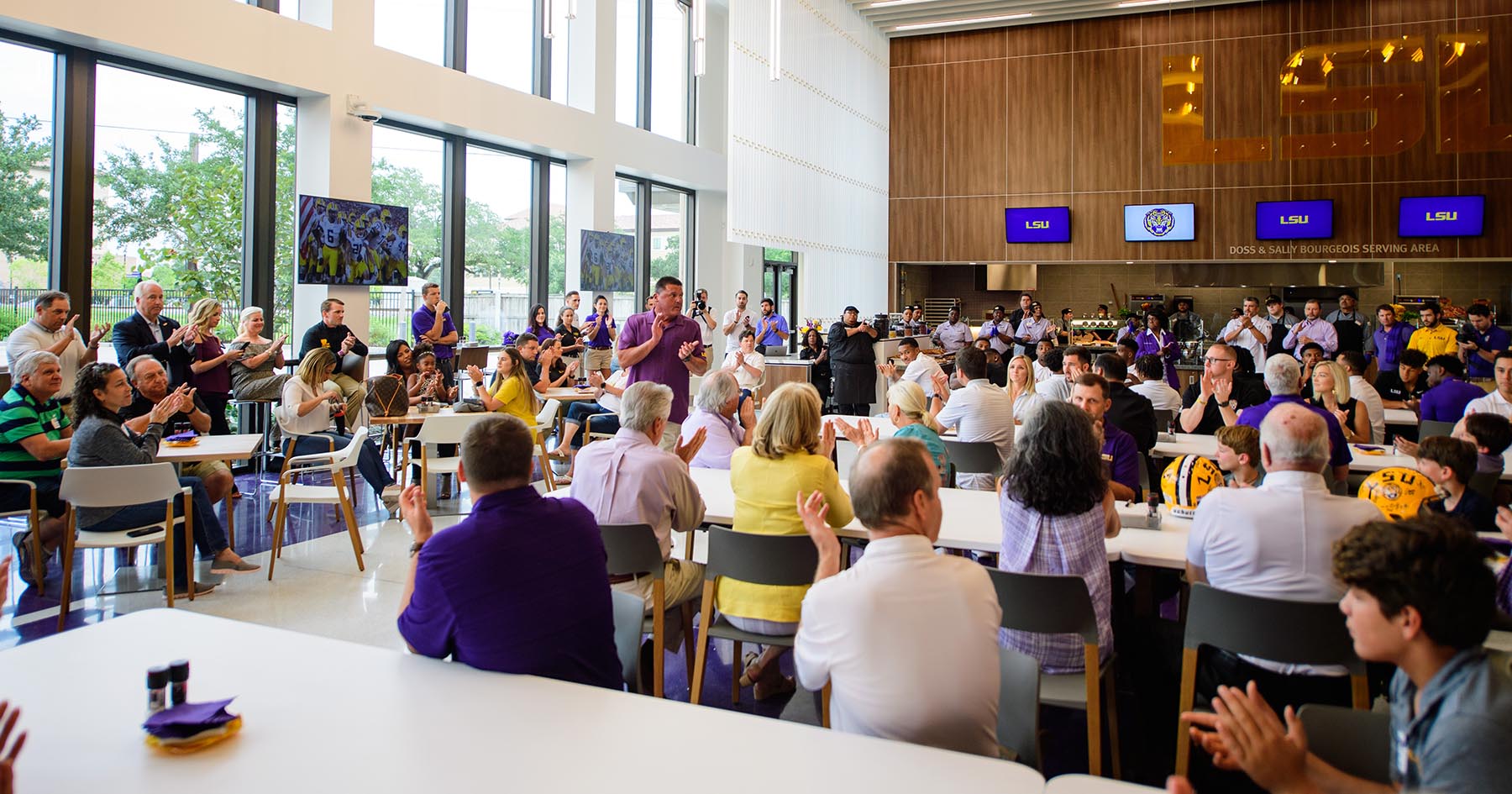 The 165-seat space features a salad bar, stone pizza oven, pasta station, flat-top grill, carving station, deli area and regionally inspired station that Johnson says is “an homage to Southern food.” In addition, three islands have the ability to house whatever else the chefs decide to prepare on a given day, and a flex station includes a heat-induction range for menu flexibility.

“We cover the breadth of human beings. I think we're aiming the menus at the very same idea.” - Michael Johnson

“You can do pasta, or you can grill steaks,” Johnson says. “It just depends on the piece of induction equipment that you put on it, which allows you different types of cooking methodologies.”

Although the goal is for students be able to enjoy a robust meal, the LSU athletics team has equipped the space with a fuel station focused on grab-and-go options, as it can be a struggle for student athletes to find the time for a full sit-down meal, Mullenix says.

While fuel stations are not new at LSU, Mullenix says that over the years, they have been trying to encourage athletes to enjoy more whole foods, such as hummus and fruit, on the run.

Mullenix also hopes diners learn something new about food every time they step into the nutrition center.

“[Student athletes’] lives change dramatically when they leave college,” she says. “I really wanted to be able to set up a scenario where they could take care of themselves because they're so catered to as young athletes and then as collegiate athletes—and then what happens when they leave is they are often very alone when it comes to luxuries like cooking, and it shouldn’t be that way.” 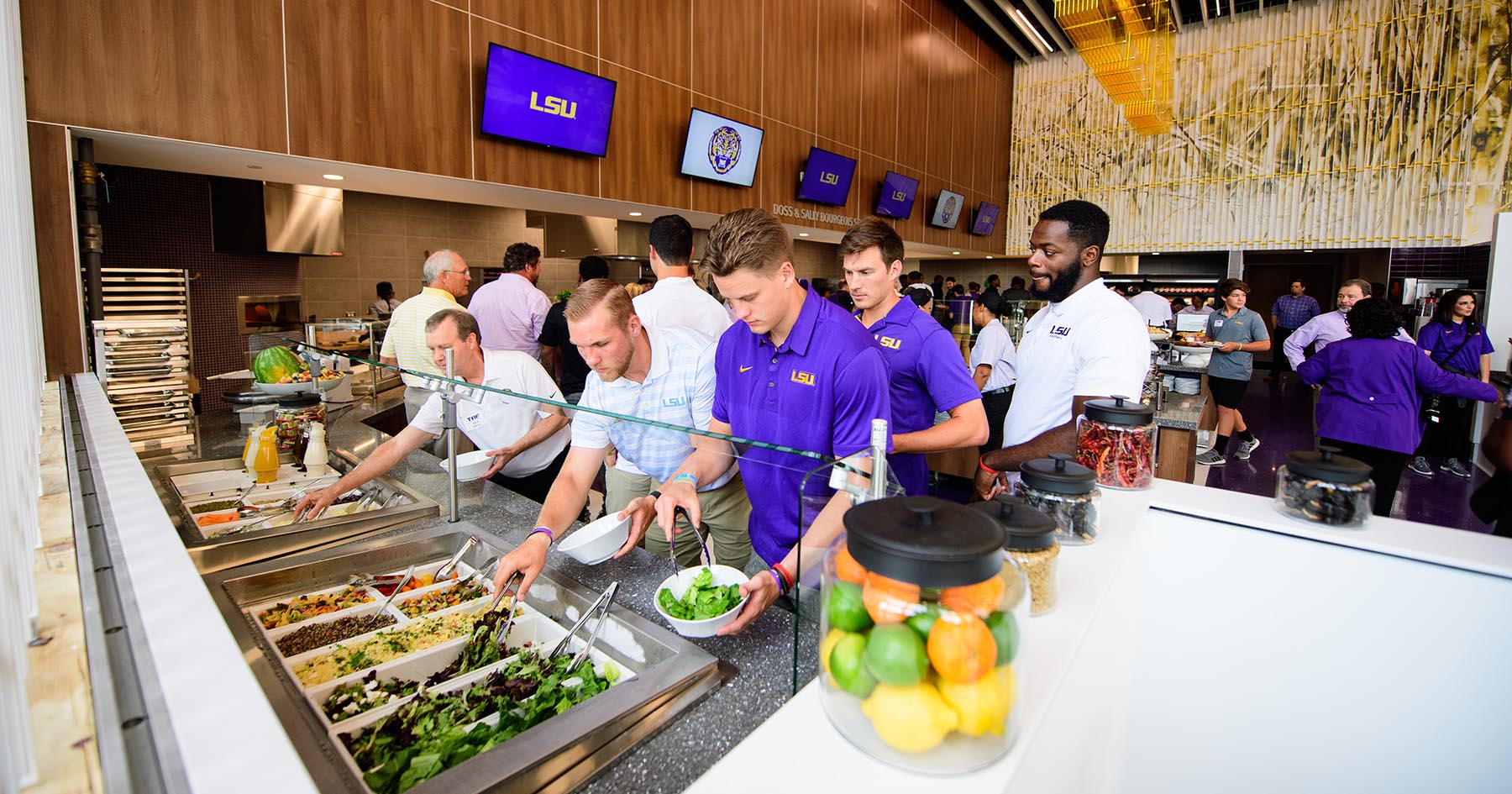 Each of the stations is spacious enough to allow a group of athletes to gather and learn basic cooking skills like sauteing vegetables. Chefs are also trained to interact with students, solicit their feedback and encourage them to ask questions.

Mullenix hopes that the knowledge students gain will stick with them long after they leave college: “We want them to be able to be self-sufficient and balance their own checkbooks and feed themselves and their families quality food.”

Inside Acre Provisions, the University of Oklahoma’s farmhouse-rustic food hall