With the growth of food halls, open kitchens in restaurants and cooking shows, guests—especially those in Generation Z—no longer are impressed by their food being made in front of them. Instead, they expect it. In order to continue delivering on that wow factor, operators are bringing different pieces of equipment into view. At Boston University, “We’ve focused on being able to show the process of making the food and really make the meal coming together an experience for students,” says Scott Rosario, marketing director for dining services. 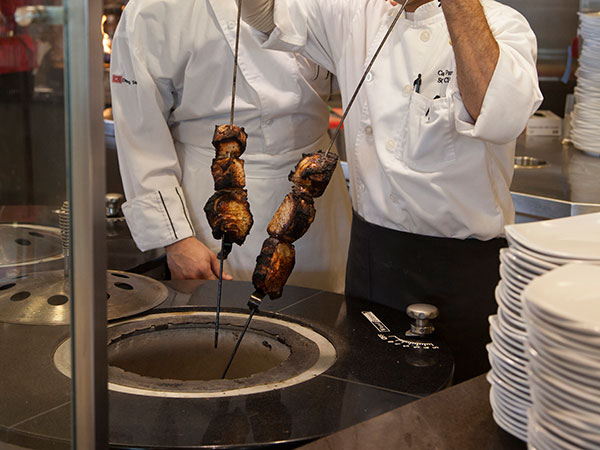 At Marciano Commons on BU’s east campus, two tandoor ovens behind glass give students a peek at naan and skewered meats as they cook. “We literally take fresh raw dough, slap it on the side of these clay ovens, and they’re like jet burners. … [Students] can look right in and see, ‘That bread is being cooked in front of my eyes,’” says Rosario. BU positioned the tandoors so that the bread can go right from the oven onto the countertop next to the cooking stations, where the naan is finished with garlic, oil and herbs, cut and served in front of the guest. “The international population on our campus has been growing steadily over the years,” says Rosario. “It’s about not only having that menu that represents our diverse student body, but making sure we get it right.” 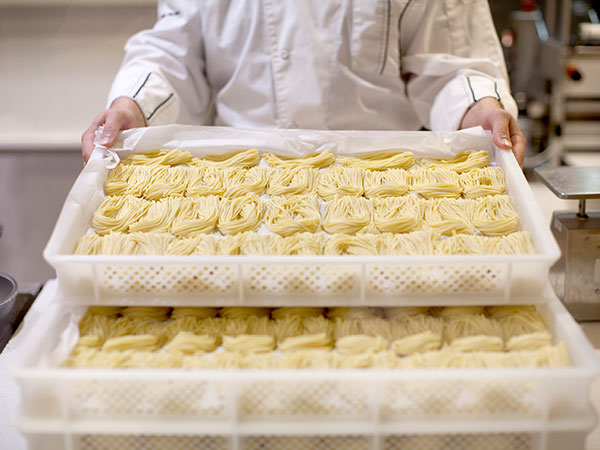 Also at Marciano, a pasta station features boiling pots and sauté pans for small-batch cooking—but the centerpiece is a pasta extruder imported from Italy. “You can see the raw ingredients, you see the flour, the water going in right in the top of the machine and fresh pasta coming out of the bottom,” says Rosario. When visiting the station for lunch, students might see fresh-made linguine hanging on a drying rack for specials such as Chicken Broccoli Alfredo.

Though the impetus to purchase the extruder was to produce a higher quality product, there also are day-to-day savings. The machine is operated by staff already manning the station, and fresh-made pasta costs 58 cents per pound versus $1.05 per pound for dry pasta, which BU previously had sourced. 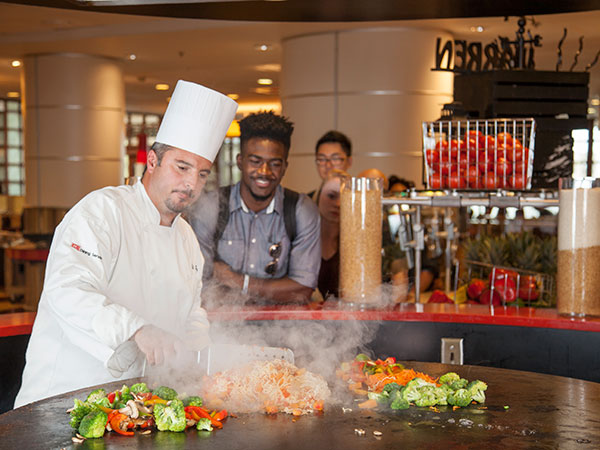 Rather than using a traditional rectangular flat-top grill for its Asian-inspired grilling station, BU’s Warren Towers dining hall features a circular grill for near-360-degree views. “It’s a 6-foot Mongolian grill, the same you might see at [live-action grilling restaurants] Fire & Ice or Benihana,” Rosario says. “It gives us a lot of ability to handle throughput. We’re serving about 2,000 students for dinner … so we want to be able to do as many orders as we can.”

The size as well as accessibility from all sides allows staff to simultaneously make dishes for other stations. “On one side, maybe we’re doing grilled cheese or quesadillas, or on the other side we’re sautéing fried rice that’s going with another dish. It gives us a lot of flexibility,” says Rosario. “You should see how many pancakes we can fit on it in the morning.”