East Side Market at Morrison Dining/photo by Melissa Hom

Morrison Dining is a 58,230-square-foot facility that’s been in the works for more than four years. It replaces an older facility, Robert Purcell Dining, and is part of a North Campus residential expansion that will eventually add 2,000 beds for students.

It’s also designed to move a lot more students through faster, and is serving around 6,200 meals a day.

“We believe food is at the center of the community, so it’s no coincidence that Morrison Dining is in the middle of the sophomore village,” says Executive Director of Dining Services Dustin Cutler.

The facility is built on two levels. On the ground floor is a commissary, catering and most food storage. The second floor houses a hot and cold kitchen, and the dining hall itself. This was very intentional, Cutler says, as “you want to keep the bulk of your production for the facility on one level; it’s much more efficient.”

It also means staff can be cross-trained to work in both foodservice and catering, which helps the team collaborate and combats the ongoing labor shortage, Cutler says.

The design of Morrison Dining, named after author and Cornell alumna Toni Morrison, was at the forefront, not an afterthought. Its aim? “[T]o feel as if you were in a food hall in a large city—sophisticated yet comfortable,” says Cutler. The seating layout is comprised of community tables; a smaller, semi-private dining room; higher tables and banquettes. 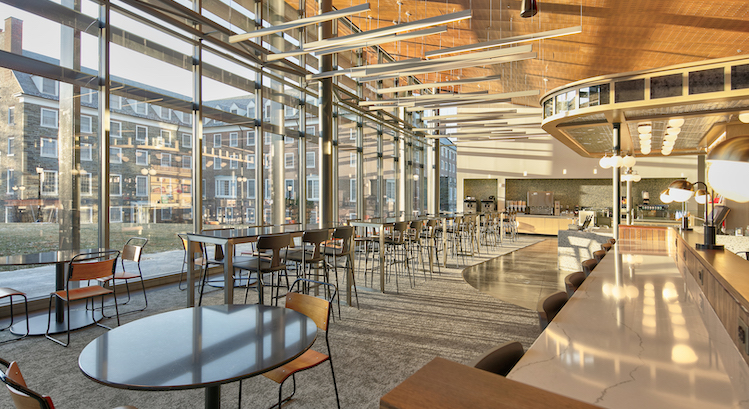 “So it’s supposed to feel as if you’re walking to micro restaurants and can sample food as you’re on this journey, this adventure,” says Cutler. “We want students to sample this place, and they may use it in different ways at different times of the day.”

The East Side Market offers a salad bar; a juice and smoothie station; and Flat Top Grill, the campus’ first dedicated vegan eatery.

The North End section has an Italian feel with pizza and pasta, while the South End is the desserts space. The pizza station is the most popular, but students are also really enjoying any station with a build-your-own approach, such as stir-fry, says Cutler. 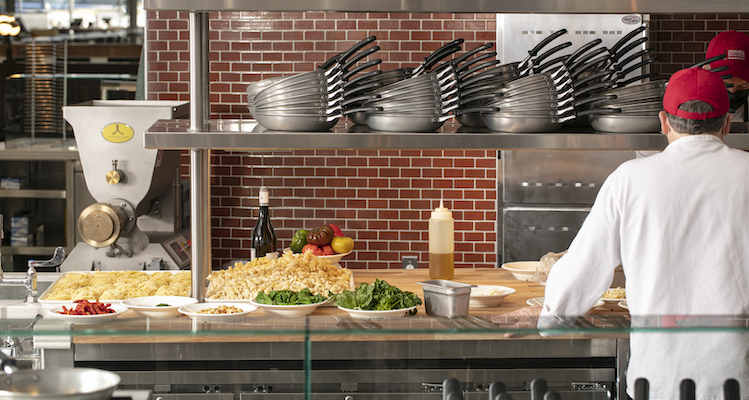 Morrison also caters to food allergies and specific dietary needs, with the help of the foodservice department’s Culinary Wellness and Innovation (CWI) team. The dedicated kosher and halal stations are so popular that students who don’t have religious restrictions eat there, too. “We’re seeing very high participation in both because we’ve enhanced them—we have the great ingredients,” Cutler says.

Dishes include Hunan beef and broccoli with sauteed Asian greens at the halal station and quinoa-stuffed peppers at the kosher one.

“We wanted to create this layered experience,” Cutler says. “Even how we make pasta—we’re making it every day in the front of house and you can see it behind a window. Even if the station’s closed, you can see it at breakfast, and students can start thinking about lunch. It’s very intentional and elevating the experience for our guests. And increasing our transparency.”

Although initial planning for Morrison pre-dated COVID, the design team didn’t need to change much about the dining hall due to the pandemic. The only thing that was altered was the addition of contactless stations for students to scan their phones for entry, which helps them get in and out quickly.

Morrison Dining also offers another component: the Discovery Kitchen, a 2,400- square-foot food lab that is “the gem of this entire facility,” Cutler says. It’s a partnership with Cornell’s Division of Nutritional Science, but it’s also where the foodservice department does all of its research and development for the CWI team and comes up with new ideas. 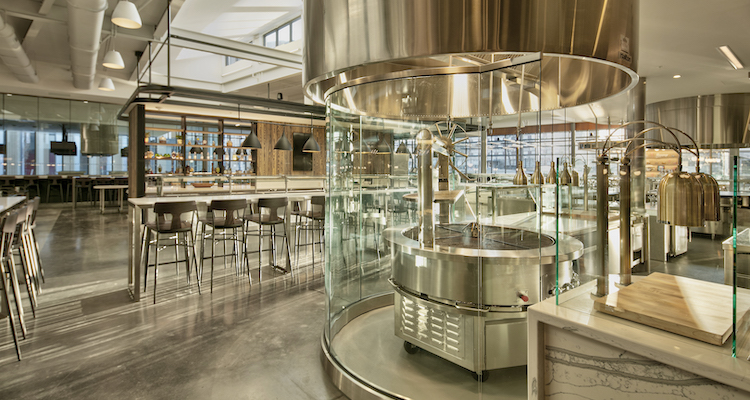 It will also be used for events, to teach soft skills to interested students about cooking, baking and nutrition. “It’s really deliberate,” says Cutler. “It will open a lot of opportunities.”

And that’s exactly what’s on the menu at Morrison Dining: opportunities. There are chances to explore food, to socialize or relax, and to be transported to different places.