While many non-commercial foodservice operators would love to have at least one bakery as part of their program, the University of Massachusetts, in Amherst, Mass., has two. 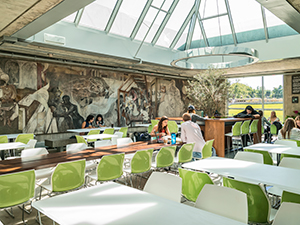 Besides its central bake shop, which supplies the four main dining commons with bread, rolls and other baked goods, the university now has a retail operation, called Yum! Bakery.

“We make all our pizza dough from scratch here,” says Dave Eichstaedt, director of retail dining. “Brownies, cookies, bars, scones and other items for all of our retail operations are being made here. We don’t make bread from scratch, but we proof and bake rolls for the deli.”

It has provided dining services with additional flexibility and given it a retail opportunity the main bakery couldn’t supply.

“The central bakery produces thousands of items at a time,” Eichstaedt says. “It’s difficult for them to do smaller orders like five dozen scones or two sheet pans of lemon squares.”

At Yum! Bakery, Eichstaedt says his team, “can bake stuff as we need it, instead of placing one order a day [with the central bakery] and not knowing how much we’ll need.”

The bakery is part of a bigger dining makeover at Blue Wall, the retail dining center located on the second floor of the Campus Center/Student Union Complex. After a $19-million renovation, Blue Wall reopened last September with 11 concept stations, six of which are new to the space. Ten of the concepts surround a central dining location, the exception being Harvest Market, an upscale convenience store/food venue that sits across the concourse.

The goal of the remodel was to handle an expected increase in foot traffic, of as many as 2,300 students and staff, from a new academic building opened near the Campus Center.

Collectively, it seems to be working. Blue Wall is now serving 25 percent more customers than it did last year. “It definitely has met and is exceeding our expectations,” Eichstaedt says. “The concepts have been very well received and the reviews have been great.”

Overall, Star Ginger is the busiest concept, in terms of sales and traffic, while Chef’s Table has been the most disappointing.

“Faculty and staff like [Chef’s Table], but not the students,” Eichstaedt says. “At lunch, students are looking for more portable items, which they can get at the other concepts. They just don’t want to sit down for a half- or quarter-chicken, roast pork or flank steak.”

Eichstaedt has also learned that while Yum! Bakery isn’t the most popular Blue Wall venue in terms of sales, it attracts the most attention from passersby, thanks to a large glass wall that faces the concourse. “The baker’s bench is right up against that wall,” Eichstaedt says. “People walking through the concourse have a great visual.”

The biggest surprise, he adds, has been Harvest Market, the convenience store that features hot and cold food bars that serve a variety of ethnic foods, salads, soups and yogurts. “We didn’t realize how big of an impact Harvest would have,” Eichstaedt says. “We have had to switch out one of the cold food bars for a hot bar to handle the volume.”